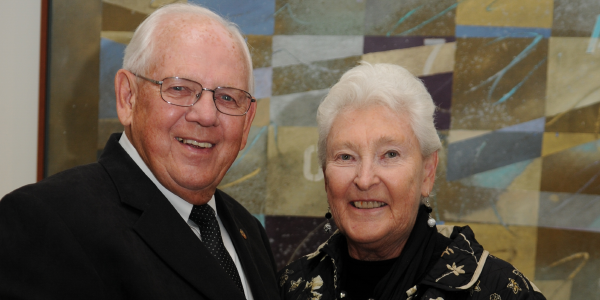 Don '54 and Alice Klepper '55 Jansma were once told that all parents want to leave something for their children. Don recalls being told, "If you have three children, why not adopt a fourth and name that child 'Charity.'"

The Jansmas embraced this philosophy and have been intentional in providing for Hope College-both in their current giving and through their estate plan.

"From a Christian perspective," Don says, "everyone should have a child named Charity." Alice agrees by adding, "We believe it's a part of our expression of who we are as Christians."

Alice learned of Hope through her RCA church in Kalamazoo, Michigan. After her group campus visit, she remembers declaring, "I'm going to Hope." She began her academic career in business. "I wanted to be able to take care of myself," she explains, and fondly recalls being the only woman in Dr. Ken Weller's business class. Then, she met Don.

Don grew up in Morrison, Illinois, just 10 miles from the Mississippi River. Most kids in the area split their attendance between Central College in Pella, Iowa, and Hope. Don's initial plans, however, included the University of Illinois and eventually going into dentistry But, at the urging of a cousin, he enrolled at Hope because of its strong reputation in chemistry.

Once at Hope, however, Don began a transformation. "My identity as a person was established while living in the Knickerbocker House," Don says. "Hope was no accident. God brought me here for a purpose. I was set free to be my own person." Then, he met Alice.

"My roommates said it would never last," laughs Don, when recalling his early relationship with Alice. He already knew by then that the Lord was calling him into the ministry after graduation.

"I had no intentions of marrying a minister," Alice says. "But," she adds, "Don was different." Alice enrolled in a few religious education courses, and this decision served her well-not only by being married to a minister, but also in her own successful career as an educator.

Now, upon celebrating 60 years of marriage, Don and Alice reflect on what Hope has meant to them and also what they wish for future generations of Hope College students.

"Hope prepared me for many different avenues," Alice says. Don, looking toward the future, says, "I dream about a continuance of a school that is sound theologically and allows students to become all that God intends for them to be-to be set free."